Or just a boyhood dream.

A drone with the appearance and behavior of a bird has an enormously wide range of applications. It took some time to develop, but then with the help of 3D printing, the result is amazing. The Drone Bird is strong, lightweight and unprecedentedly effective.

This story you would almost want to start with: Is it a bird, is it a plane … and a whole generation completes that with the reference to Superman. In terms of impact, the answer here is equally surprising. It’s a Drone Bird. A drone so similar in both shape and behavior to a bird of prey that other birds fall for this trick – terrifying to them. 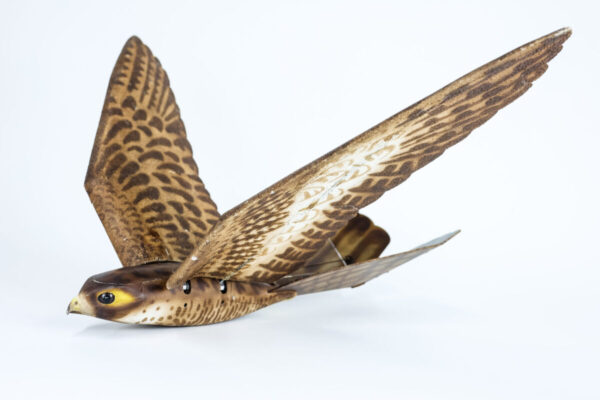 Jan Willem van den Eijkel has been involved with this Drone Bird since 2016. His career before that took him all over the world and then also gave him the freedom to fulfill his childhood dream: to become a helicopter pilot. The practice of the latter profession turned out to be a little less romantic than the dream, and so he went looking for a challenge to sink his teeth into. While searching, he came across a company called Clear Flight Solutions who were in the process of marketing a true robotic bird, The Drone Bird.

“This company actually had everything that piqued my interest. Since childhood, helicopters were my great passion, I had experience in entrepreneurship, as a director and by accident I actually came across this company then. They were still a real start-up at that time and were looking for sales people. The company consisted of about twenty to twenty-five employees. All of them engineers. They had managed to bring in good investments, but sales was not yet developed.”

He started talking, and after the team’s initial surprise, he was brought in to expand the technical success with commercial success. The business case had not been developed at that time, and Jan-Willem went to his in-laws in Cyprus with the drone under his arm. There he showed the added value in repelling birds that can be a real pest on that island.

Just a step back to the very beginning. The Drone Bird grew out of a research project by Nico Nijenhuis, a student at the University of Twente. He was looking for a topic for his master’s thesis and, thanks to his supervisor, stumbled upon a prototype robotic bird. The principle had been developed by inventor Robert Mutsers, a real Willie Carrot who “like so many here in the company, suffers from Leonardo Da Vinci syndrome. He wanted the bird to fly as true to nature as possible, without stabilizers, but really with a natural wing beat, exactly as a bird flies,” Van den Eijkel says.

The bird was developed, flapping and all. A real Flapping Falcon. And as it turned out, the robotic bird was so true to nature that it deterred other birds. That opened a lot of perspectives. “It was apparent from the beginning that an important target group was aviation. There is often a big bird problem at airports, but there were no rules for flying drones back then. The target market was clear, just think of Captain Sully having to land his plane in the Hudson River because of geese in both engines. He only managed that because he was an exceptionally good pilot; you don’t have to think what would have happened otherwise.”

Van den Eijkel managed to conduct trials at several locations near airports that were very successful. “In England and Canada those trials were very successful, but these are really long-term processes. It can take up to two years before you have the right parties at the table at all.” The business idea until then was to offer the drone as a service. “Nico’s thought was that the bird would be too expensive to sell and, in addition, there was a fear that it would then be copied quickly. But as a service, in practice it turned out to be much more challenging and much more costly.”

So the business model was upended. “Now we are selling our Drone Bird and training the pilots who will fly the bird themselves.” That was still quite a difficult story to get hands on internally for this, but the wheel is set.

Van den Eijkel speaks passionately about the wonderful adventures he has already had. “At the dredging company Van Oort, we did a great project in Kazakhstan. There, the Prorva Canal was constructed that gave Kazakhstan access to the Caspian Sea. In Kazakhstan there is very strict bird protection. As soon as birds start nesting anywhere, everything has to give way. And the construction of a canal creates silt deposits on which breeding birds very quickly perch. As soon as that happened, the work was stopped. With our peregrine falcon drone we were able to chase the birds away in an animal-friendly way, which in turn reflected very nicely on Van Oort.”

For two years, pilots from The Drone Bird flew the peregrine robots at the project. “Our staff had to have all kinds of training and accreditations to be allowed to work there at all, so that had quite a lot of issues.”

The Drone Bird is also in high demand for entertainment. “We did an amazing show in the United Arab Emirates at the celebration of forty years of independence. A show full of effects was organized in a huge stadium by the renowned Done and Dusted Productions from England. Nothing was too crazy, the whole world was flown in for this and we were asked to do the opening of the show. For a minute and a half we let our falcon fly to the beat of music. If you then consider that in an open stadium you have to deal with vortexes, sheer winds and a lot of turbulence, and that the falcon, weighing almost a kilo, has a speed of sixty or seventy kilometers per hour, it is quite a risk. So we spent three weeks practicing fully to fly in sync and on time.”

In the United States, there is much interest in the drone from flora and fauna management. And The Drone Bird has also been featured in several films and television series. In one of those films, the falcon was used as a spy tool, which was soon picked up by various secret services who saw surveillance opportunities. For that, the drone with flapping wings was not suitable because of its limited battery life. But even without wings – the newest and most effective model is a fixed wing Peregrine Falcon/falcon – the drone proves to be suitable for almost all of its known applications, if not better!

During corona time, the relative calm has been used to improve the mechanics so the drone now has a longer uptime. “Actually, we’ve done a complete mechanical overhaul and only the appearance is similar to the Drone Birds before that. And whether the birds don’t get used to the presence of a Drone Bird? “The fear of birds of prey is too deep in their instincts. Basically, they get used to all methods of deterrence such as guns, rattles and you name it. But their instinctive fear of raptors is too deep in their dna.”

Many more fascinating examples come to mind in Van den Eijkel’s conversation. Testing systems around wind farms, chasing birds away from berry growers, development underway to fly Drone Birds missions and to take out the “man in the loop. So that the drone docks itself on a charging station. His enthusiasm is not only contagious but understandable. It is an incredibly exciting development.

So with the help of 3D printing. We have now come to that. That 3D printing provides a favorable price, light weight and high strength. “Especially with the lightweight carbon we use now. In the beginning we worked with fiberglass and epoxy, and the drone was made entirely by hand. We first worked with another party for the 3D printing, but we were looking for a company that was a little closer to home, so it was easier for us to get together when we wanted to discuss something. That’s how I ended up with Pie Oh Die, as we call them.” He laughs and tells how he was invited for a tour at Parts On Demand. “I was explained there all the printers and finishing operations and also what different materials there are. That gave real confidence. You noticed that they don’t just write down order, but really take your questions seriously. We partnered with them and we like it very much. They actively think through issues such as material selection and give proactive advice.”

Not all parts of the drone are 3D printed. “Especially the body and various cover flaps are printed. That gives us quite a few advantages such as a much faster delivery time, but also lower costs. We can now really pioneer with materials, shapes and wall thicknesses, for example, because we can change designs much more quickly, and so you can continue to develop faster. And so we can respond more quickly to specific questions and applications. And that makes a person happy!”