The title of this article contains the whole story. We speak with Bart de Kiefte, CTO of Livit in Dordrecht where assistive devices are made. Especially in the field of prosthetics, orthoses and braces, but also orthotics, custom shoes to support stockings and safety shoes.

On their website we read, “At Livit, we believe that everyone deserves to be able to move freely.” And the customer responses don’t lie, for that purpose they do a lot. So too in the area of development. Parts on Demand may make a modest contribution to this today. 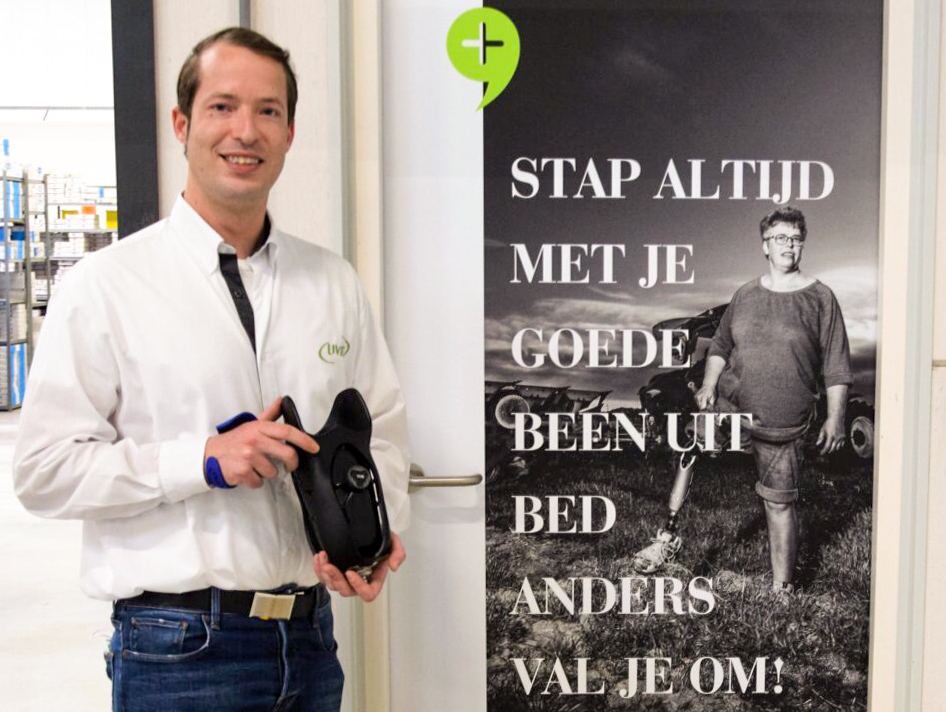 In 2012, Bart came to Livit. There, he saw a work environment where he quickly felt at home and could do his part in automating both the production and design departments. “Six months after I joined, I set up the CAD/CAM department. And in 2014 I made a business case for robotization. We now have two in operation, and they have paid for themselves in six months to a year. Many steps in the production process are repetitive, and you can arrange that much more easily in a digital system. In the past, everything was done with plaster, but with robots that goes much better and you can also achieve better quality.”

The first time at Livit proved to be a real eye-opener for De Kiefte. “I thought of orthopedics as orthotics and braces, but it turned out there was a world behind that. The sheer number of product groups gives an indication of the diversity. And with prostheses and orthoses, for example, you often get that they need to be renewed every two years. I did learn that people often sell themselves short by not thinking about aids. Someone who has difficulty walking due to a muscle disease, for example, can walk much better with our Blue Rockers – a dynamic ankle/foot orthosis – while it is not visible to the outside world.”

In addition to the automation process, Bart has also made preparations to introduce 3D printing into the production process. “We involved all the engineering departments in this, both the biomechanical and the industrial and mechanical designers have a contribution in the whole. With the complete engineering team, we picked up the developments and discussed the progress on a weekly basis, for example about the macros that had to be built.”

Again, Bart picked this up back in 2014. “We wanted to map out very carefully what is feasible and what exactly is possible with which technology. Neil van Es from Parts on Demand understands that very well. Together we mapped out the risks of the techniques and he also participated in a panel discussion. Of course, robotization also has risks that we have considered extensively, for example when it comes to employment. But the practice is that since the arrival of the robots we have only employed more staff. With thus a more accurate result. The employees have been given space for other work, for example to provide better finishing, so that the end result has a better quality.”

“When I joined, Jan van de Werken was still working here as director. He was a very active cyclist and hiker, with a prosthesis. He was such a great inspiration to me, he didn’t let anything stop him. That’s why, before he retired, I wanted to develop an adaptive prosthesis. And I succeeded! Because a stump, for example, by retaining more and less fluid, can require a different fit of the prosthesis from day to day, or even from moment to moment. The adaptive prosthesis can adjust itself to the shape, with a specially developed mechanism. And that has now proven to be a great success!”

The adaptive prosthesis is currently still in the testing phase. “We are now working with test customers to create an evidence-based foundation. Then we can submit it to TNO for testing and then the prototype is finished. Then we can make a new prosthesis much faster, where we are now spending six days drawing it will soon be done within two hours.”

The difference is in the technology

Bart himself started FDM printing years ago in a friend’s attic room. “Quite a hassle too with all those fumes,” he laughs. “With SLS you get a much better strength, that’s really a big difference. Parts on Demand’s printers are very accurate and Neil is really at the top when it comes to the latest materials and post-processing. We work with seven different companies, but when it comes to the adaptive prosthesis, we only order it from Parts on Demand. The quality we’re looking for for a specific product determines who we order it from.”

He uses a kind of matrix to see when 3D printing is appropriate. Is it profitable, does it add value and is it a USP. And with 3D printing, you have no limitations in your design. That’s not to be underestimated either.

In March 2020, Livit moved into a beautiful new building in Dordrecht, where all production also takes place, for all branches in the country. “Here we were able to realize the centralization of production. This has enormous advantages, because we also exchange the knowledge and experience of the employees here. The new premises of the final piece of development, both on centralization and automation. We are very grateful that we can work with the attitude that helping comes before profit . A lot of value is placed on the social importance we have as a company. And because of that social importance, we also want to have all the technology in-house. Close proximity to patients. Because every product is unique every time. We have quite a few consulting rooms here at home and can take a scan and sometimes have the new facility ready within a day. Responding quickly and helping, that’s what it’s all about.”

That social importance and that helping out can be seen in various areas, including in the fact that the employees themselves are very involved with the target group. We already saw the director with a prosthesis, but also one of the advisors is himself a customer from childhood. It also includes a variety of ways for the staff to experience for themselves what it is like to use a prosthesis. So that they can empathize in the best possible way. “For example, we also work with virtual reality, which allows us to meet and conference with people all over the world. And even though prosthetics are our business, we prefer to work on facilities that make prosthetics unnecessary.”

Why Parts on Demand

“The finish compared to the competitors is very good, and the tolerances very precise. We have a very nice contact where they think very well with us. We test the latest of the latest with them.”

Livit developed into the market leader in orthopedic devices. HAL Investments announced the acquisition on February 9 by Ottobock, which “hereby strengthens its position with international knowledge, experience and innovative strength.”