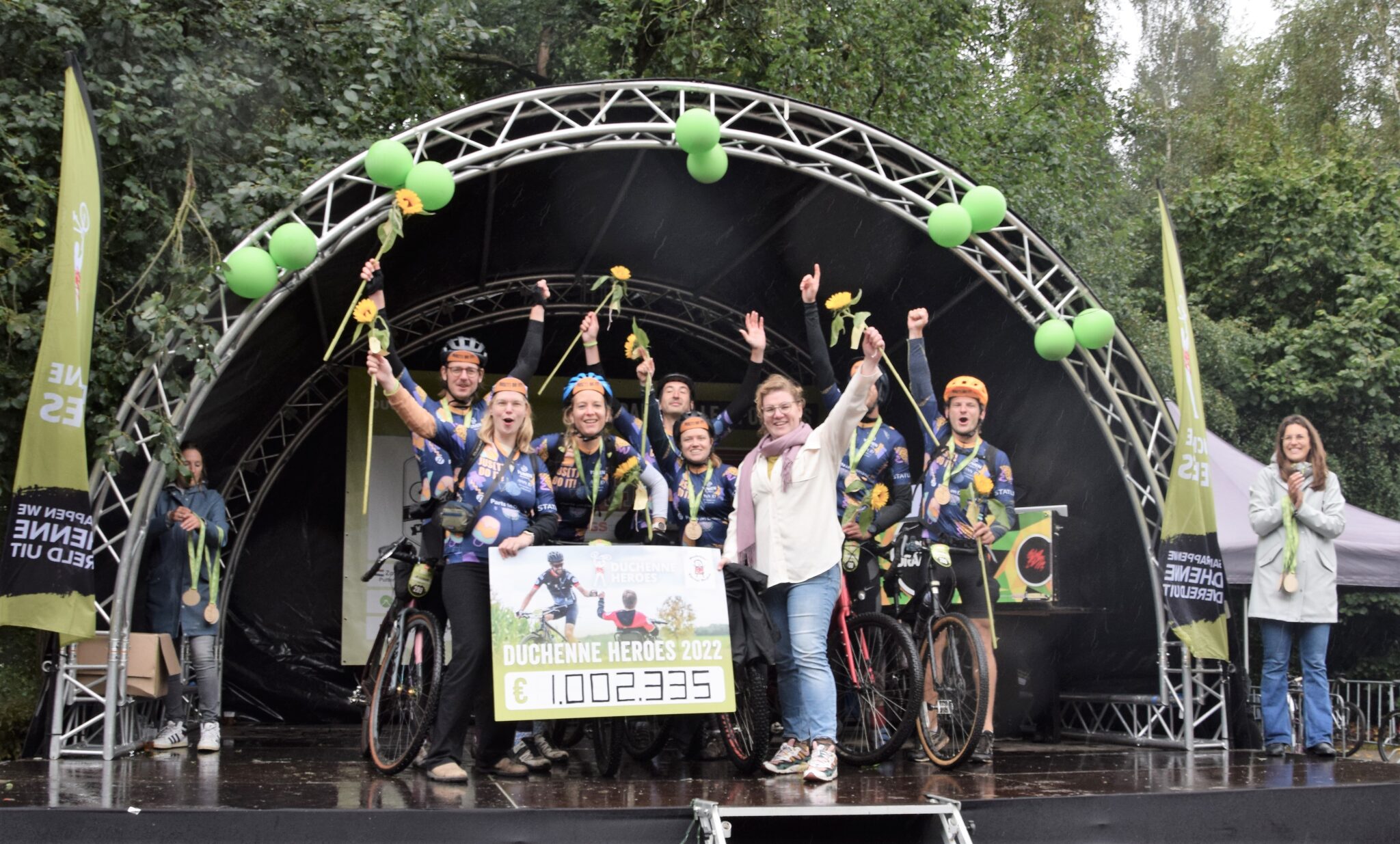 Of course we wanted to shout them across the finish line, preferably cheering them on the whole way. The latter was not possible; the former – albeit with some hardship – was.

So on a very wet and cold Saturday morning, videographer Laurens and writer Janet were on hand to help team Jus(t) do it! from Yumen Bionics across the finish line of Duchenne Heroes 2022. Chilled to the bone, the reporters already were, so let alone what hardships these heroes endured. Although team member Agnes had just had a bike ride in the Andes to add to her Palmares, and the rest of the team also appeared to be very well trained.

And what a feat they accomplished. With seven cyclists and two companions, the team raised more money than their own target amount with three days of mostly mountain biking in the mud. And on top of that, these juggernauts scored a record number of punctures for a bike in one day. Team member Sjaak therefore ran the final stretch to the finish line on the second day, earning the Hero in Socks mention. It must have felt like a warm bath that the crowd was present in large numbers at the Drielandenpunt in Vaals to see the soaking wet mountain bikers cross the finish line.

Project engineer Jolinda Horstik of Yumen Bionics was not cycling with us herself, and was able to update us nicely on the progress of the pilot project with the exoskeletons while we waited. “We have now provided an exoskeleton to five pioneers.” She smiles broadly at our questioning look at the word pioneers. “Yes, pioneers, that’s what we call our test panel,” she laughs. “The pilot project runs for nine months, and during that time we make sure that the pioneers can not only perform practical actions using the exoskeleton, but also their hobbies. The first thing we ask them at the introduction is what they would like to be able to do. And that ranges from photography to playing piano, chess or gaming.”

Three months have now passed from the pilot phase. “Based on the feedback we get from the testers in this phase, we can keep improving the exoskeleton. And in doing so, we are looking at ease of use, but also at wear parts. The pioneers range in age from eleven to seventeen. And we – as well as they – have all, every single one of them, been positively surprised. Not only have our own expectations been exceeded, but also the reactions of the children themselves are really wonderful!”

Duchenne Heroes is a fundraiser that has been run for the sixteenth time this year. The net proceeds will go to Duchenne Parent Projects from which Yumen Bionics’ pilot project also originated and is funded. And once again this year the magic limit of one million euros was crossed, a total of €1,002,335 euros was raised! A real hero’s achievement!

Here is the video impression of the heroic trek.