The universe at your fingertips 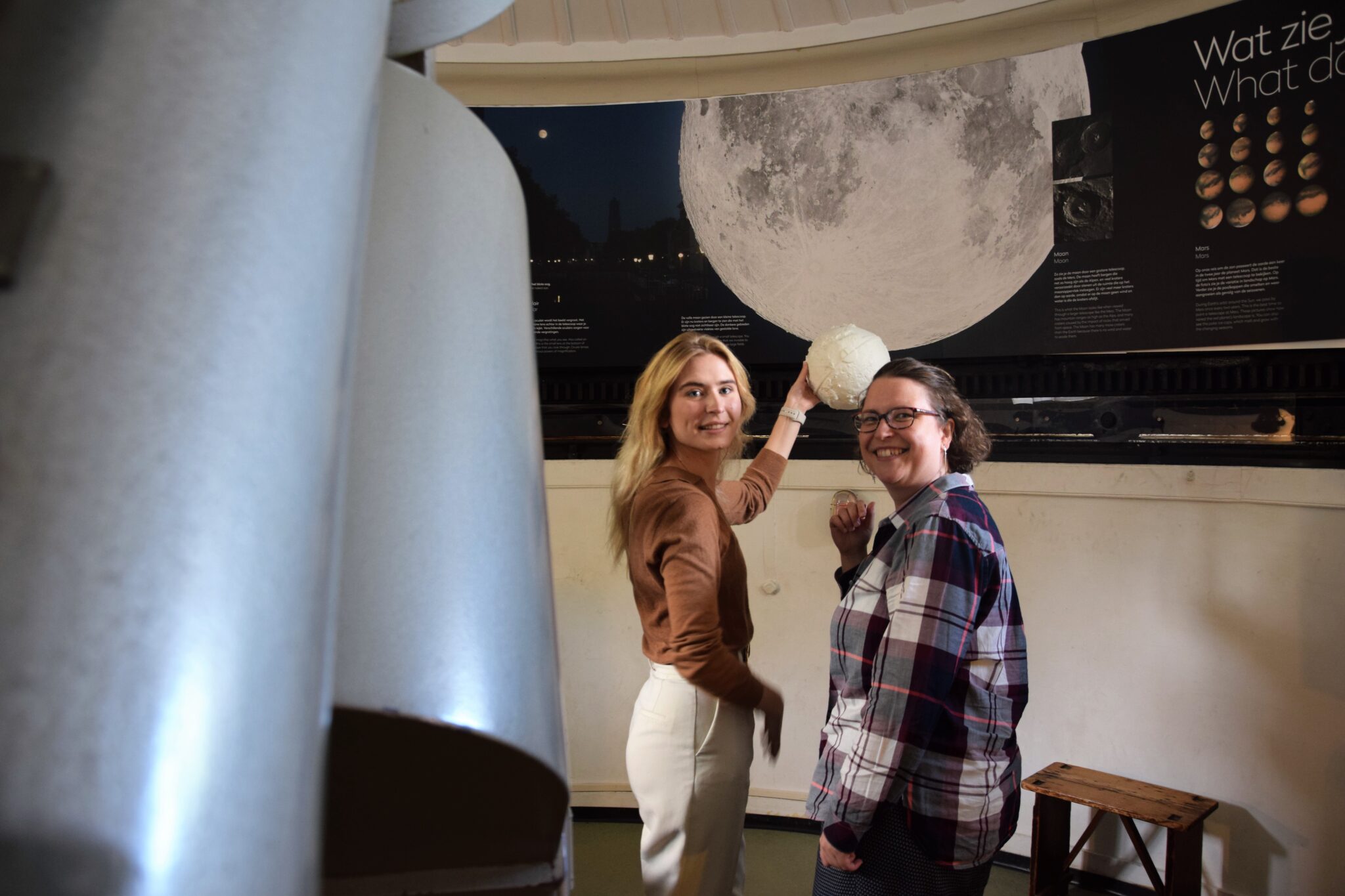 In Utrecht, you’ll find an authentic 19th-century observatory. Built on the Sonnenborgh bastion from 1552, and today a palace of taste for lovers of stars and astronomy. Now also for people with visual impairments. Our own Lana went to take a closer look for you.

Sonnenborgh is a museum of weather and astronomy and a public observatory. As a visitor here, you’ll get to explore yourself, do experiments and even – weather permitting – take a look through a real telescope. And recently there is even a tour for the blind and visually impaired. Supported by sound as well as 3D printed objects that allow you to “see” a galaxy with your fingers, for example. But also explore the distance and individual sizes of the planets, the surface of the moon, all using your sense of touch.

Laura van Waas is project manager of this tour and is happy to explain how it came about. “The question came from the target group. There is very little about this subject in the Netherlands for people with a visual impairment. It is also very difficult to imagine a black sky with a point of light, especially if you have no spatial insight because you were born blind. I had just started in the position of project leader and this was my first project. We wrote a plan in the fall of 2019 and submitted it for the RAAK incentive award, which was created especially for this purpose. The jury nominates three projects and the public chooses the winner. And that was us!” She beams with pride, and rightfully so.

“We spoke with many people from the target group including the Eye Association Utrecht and with experts on education from Bartiméus and Visio. We really wanted to make sure we got as much input as possible. It turned out that there were already several initiatives in the astronomical world to make astronomy tactile. In Groningen and Valencia, people had already started developing materials, and initiatives for 3D printing objects had already been set up. At NASA, sound files of images from the universe had been created and we were able to make very grateful use of all these initiatives. And by winning the RAAK Incentive Award, the project suddenly became very big.”

Thus, in addition to tours, budget could be used to set up teaching programs for visually impaired students and both the building and website could be made more accessible. “There is a tremendous amount of goodwill for this project that now allows us to host a tour on a monthly basis. People can sign up to come to the tour with a companion.”

“Moreover, an added benefit of winning this award was that we suddenly had access to a whole network of people who offered their help. This included two former volunteers who turned out to have knowledge of the target group. Because before giving the tour, of course, you have to train the supervisors – all volunteers – extensively.”

For 3D printing, Laura sought a party who could take this off her hands. “The response I received at Parts On Demand was very warm. I was allowed to come by to see the printing process with my own eyes and we also received a contribution to the costs because Neil van Es was happy to support the project. The collaboration is really very special, during my visit all the time was taken and I immediately felt taken seriously and received very clear explanations. I also really got the feeling that Neil also thought it was very special and that he very much wanted to see it realized.”

Audience response has been great, we hear from Laura. “Vincent Bijlo, himself blind from birth, was on the jury, presented the prize and opened the exhibition. He was extremely enthusiastic. During the official opening ceremony we invited everyone who had contributed to the creation. We had a full house with experts, volunteers, representatives of companies that had cooperated and people with visual impairments from our sounding board. We created a carousel where everyone could do their own tour. 3D objects, sounds from NASA, a planet rope that shows the distance between the various planets and a solar dish that also captures satellite sounds. But the enormous telescope and the building itself also contribute to the tactile experience. This historic building breathes history; you can smell the books in the library, for example. There is so much to experience that it can’t all fit into one tour, people really need several visits to experience everything.”

A comment from a visitor that we should not leave out, “I have visited all the museums in the Netherlands that are specially equipped for the visually impaired. But this is by far the best tour!” And Vincent Bijlo also gave a wonderful compliment. He already knew the museum, but was very excited about the project. “He told me he found it much more understandable now, and that it makes him hungry for more information.” And that, according to Laura, is exactly the purpose of a museum. That you go out more curious than you come in.

The tour started for adults last April, and starting in September there will also be a program for elementary and secondary schools. “The educational program is suitable for all students, not just visually impaired children.”